Gillian “The Savage” Robertson RECENTLY submitted Cortney Casey in the 3rd round via RNC and set the all-time record for most finishes in the UFC women’s flyweight division.

The Scrap caught up with Robertson fresh off a training session with head coach Din Thomas to discuss her most recent victory inside of the octagon.

“I am happy that I got a finish. Because she’s a tough opponent and that’s the second time she has ever been finished so to do that is a big accomplishment but I would have loved to do it in more of a flashier fashion,” said Robertson. “I would have loved to get off some more ground and pound and do more damage on the ground. I don’t think we saw the best Gillian Robertson out there but the next fight you will definitely see that”.

Robertson secured this win at the UFC Apex in front of no fans obviously due to the COVID pandemic. We asked Gillian how it felt to compete in front of no fans in the stands. “I felt awkward celebrating. It is so silent in there it’s a weird scenario. It’s awkwardly chill in there and weirdly relaxed”.

As most MMA fans know, Gillian and head coach Din Thomas have departed American Top Team. Robertson helped shed some light on what her current training situation is like. “I’m getting a lot more one on one time with my coach. I don’t really work with too many training partners, a lot of that has to do with the corona virus. But 95% of the training is done at Din’s house and I’ve really seen myself excel over the last couple months because I have been getting so much one on one attention from my coach”.

Robertson will now turn her attention to SUG grappling matchup in early July before looking for her next scrap in the UFC. “I would love to get on fight island, I will be competing on Submission Underground on July 12th and then hopefully I get the call for a fight soon after that”. When asked about a specific opponent, Robertson didn’t hesitate to call her shot. “Antonina Shevchenko would be a great match up for me. She is 8-2 and I am 8-4 and that would be another nice submission to add to my record. I’m not trying to let these girls catch up”. 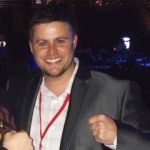