One of the UFC’s youngest stars Chase Hooper has a new matchup, and it’s with Brazil’s own Felipe Colares. Hooper confirmed the news on social media shortly after it was first announced by Combate.

This featherweight bout comes at a pivotal moment in both men’s careers, with both fighters trading wins and losses in their short time with the UFC.

A “Dream” on a Mission Against “Cabocau”

Chase Hooper (10-2-1, 2-2 UFC) made history signing with the promotion at the young age of 18 on a “developmental” deal after his win on Dana White’s Contender Series. This deal allowed Hooper to fight under regional promotions to garner more experience before making his UFC run.

“The Dream” made his UFC debut in 2019 with a win over Daniel Teymur via round one KO/TKO. Since then, it’s proved difficult for Chase Hooper to hit his stride. Trading wins and losses as mentioned earlier.

Coming off a hard-fought decision loss to Steven Petterson at UFC 263, look for “The Dream” to come out hunting the finish against Colares.

Felipe Colares (10-3, 2-3 UFC) has had a similar career to Hooper so far, minus the developmental deal. He was a surging undefeated prospect in Brazil’s regional scene garnering a stunning record in promotions like Jungle Fights and North Extreme Cagefighting.

Joining the UFC would prove to be a tough choice though as Colares would lose via decision upon his debut with the company. Since then, he’s also struggled to gain momentum and is also coming off a loss in his last fight.

The May 21st UFC event has no other fights currently announced. There is no word on the main event of the card either. Look for updates as the date of the event draws closer.

Who do you have winning this fight? Let us know in the comments below! 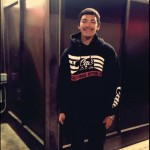 Makoa Goble has had a lifelong passion for writing and MMA. He enjoys spending time with his two kids and family. Follow him on Twitter @MmaMakoa_.