UFC 279 was lined up to be one of the more electrifying PPVs of the year. When guys like Nate Diaz, Tony Ferguson, Khamzat Chimaev, Kevin Holland, and Daniel Rodriguez fight on the same card… You know you’re in for a real treat.

Not to mention, when bad blood is involved, it always makes things more interesting. However, things started to take a turn for the worse and it all started with yesterday’s press conference. Before the press conference was able to start, a three-way backstage brawl spilled out between Chimaev’s team, Diaz’s team, and Holland.

For everyones safety the press conference was called off on the spot by the UFC President, Dana White.

Nothing More Could Go Wrong… Right?

Just as things seemed as though they couldn’t get any worse, they got much worse. One half of the main event, Khamzat Chimaev, missed weight by a staggering 7.5 pounds. Typically when fighters miss weight, especially for a PPV main event, it’s within a half a pound to a pound over. However, when a fighter misses weight by a substantial amount, then something had to have gone horribly wrong.

The strange part is that Khamzat is known for making weight in extreme circumstances. Back in July of 2020, Chimaev was scheduled to fight at middleweight. He made weight, fought his opponent, and won in dominant fashion.

Ten days later, he fought at welterweight… Despite taking the fight on very short notice, Chimaev managed to make the weight and dominate his opponent like he did ten days prior. So why did Chimaev miss weight by so much?

One Theory Why Chimaev Missed Weight

Dana White went on SportsCenter to give a bit of insight as to what happened behind the scenes with Khamzat’s weight cut. But even then, fight fans are still speculating… After evaluating all the possible reasons as to why Chimaev missed weight by such a large margin, it has led to only one plausible theory. He simply didn’t take this fight with Nate Diaz as serious as he normally does…

Since the day this fight was announced, it was perceived as a mismatch by the largest of margins. Putting an undefeated prospect vs. a seasoned vet who’s on his last fight in the UFC is never a good combination. In most scenarios, the prospect crushes the old dog and continues on in his career.

Perhaps Chimaev bought into everything the media was saying and didn’t thoroughly prepare for this fight like how he did against Gilbert Burns. On Wednesday, Chimaev did an interview with UFC commentator Daniel Cormier and said that he weighed about 85 kilos (187lbs). Before weighting in, he revealed to Megan Olivi after the final faceoffs that he was told to stop cutting weight at 4am.

Chimaev could’ve put just as much time into his training as he did other fights, but if his nutrition wasn’t in check then that’s all you need to cause such a bad weight cut. Because of this one weight miss, three brand new matchups were made for UFC 279. Some fans are happy about the changes, others not so much. But it’s safe to say that the UFC has had a hectic 24 hours unlike no other.

What are your thoughts on Khamzat Chimaev missing weight? Let us know in the comments below. 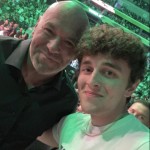